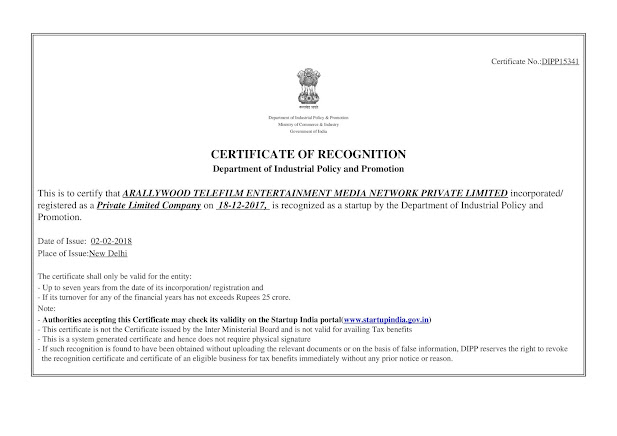 Popular posts from this blog

Welcome To ARALLYWOOD TELEFILM ENTERTAINMENT MEDIA NETWORK PRIVATE LIMITED a company Incorporated and Approved by Government of India under company act 2013 and Recognized by Department of Industrial Promotion & Policy as fastest growing STARTUP company. ARALLYWOOD is india fastest growing Bollywood Hollywood Film TV Media Entertainment Technology with New and most advanced new concept ideas and innovation in Bollywood Hollywood Film TV Media Entertainment Technology. We give opportunity to all new talented artists of all sections without any discrimination. We provide very Unique and new Concepts and Idea Platform for artists that other companies do not provide. In this way by using our Technological Platform all Artists can show their Talents to the World without investing too much money. We very less and nominal expenses artists get unique technological account platform where they can do everything their own way. They can also make very good earning with that system platform p
1 comment
Read more